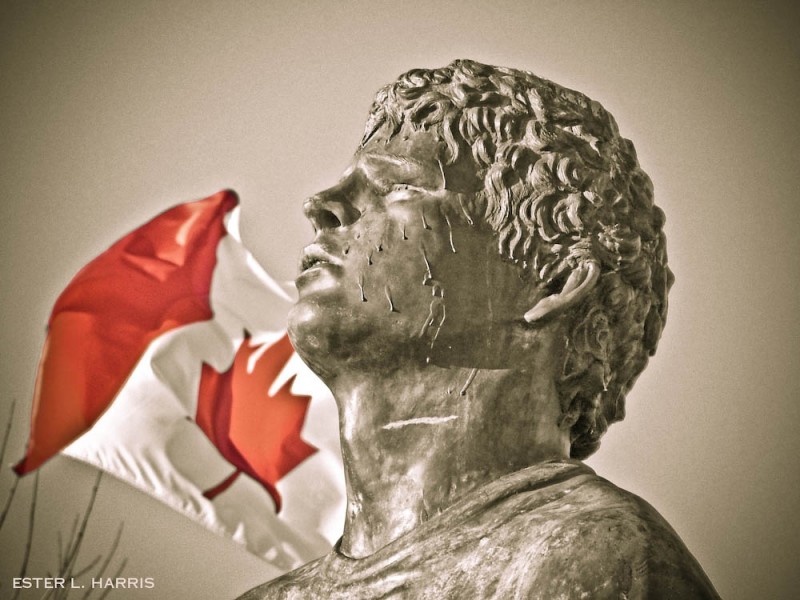 For those of you who don't know who this man is, he is Terry Fox. He battled cancer for many years and made it his mission to run from one coast of Canada to the other to raise money and awareness for cancer research (with a prosthetic leg!) . Unfortunately, his journey ended here in my hometown, Thunder Bay, Ontario and his memorial park is where I shot this photo.

The Canadian flag in the shot was not intended... but I think it can stay.

Check out my father's account! http://mjchisholm.aminus3.com/ And have a nice day. :)

wow... impressive image.. thanks for the blurb as well!

Awesome photography Ester, a great shot all a round.Your doing great keep up the great work.

Awesome photography Ester, a great shot all around. Keep up the great work.

Wonderful and I think the inclusion of the flag is nothing less than brilliant even if it wasn't intended.

Beautiful statue and beautifully displayed here with the colors muted except for the bold red and white of our flag! Superbly done!

A great shot Ester. I have some great shot from that look out. Used to have a plaque in the information Pavillion. Forest capital of 2000. Nice to see another NWO photgrapher on the blog. Keep up the good work.